I was so excited to work on this commissioned painting.  Not only did it represent something really special to the family but also for me.

One of the beauties of art, is that we may all look at the same painting but see different things.  I love that and I’d love to hear your story you see as you look at this painting too.

For me it showed the relationship we have with animals and how they are as much a part of our families as any other member.

These are among two, of the very special animals I paint.  They are known for their healing work that they do as therapy dogs.  Their demeanor is so calming, that to be in their presence is truly an honor.  I was just so amazed by them when we met.

Animals have emotions and feelings …  just as we do.  The thrill of going on vacation and experiencing new things like a trip to the beach is just as important to them as us.

I can feel their joy as they look out upon the water, “Aren’t we lucky?” as they wait for their human to Be Right Back.

This painting was featured on a segment on WCET TV that aired on the Arts Bridge Show.  Did you miss it?  If so here is a link to watch it online at 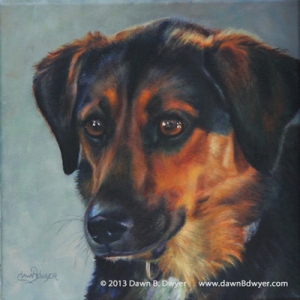 Having an oil portrait done of your pet can actually be transformational for them.  This is the fourth painting in a series of four.  “Shedding Shyness” has a beautiful story centered around the painting.

When I was first contacted by Sawyer’s Dad about doing her portrait he told me he was very concerned about photographing her.  You see, she was very shy and he didn’t think I would even be able to get  in the door of the house, let alone get a  photo of her.  She was very shy around people and especially strangers.

Well, Sawyer surprised us all.  She wanted to have a portrait done like the rest of the four legged family members.  I planned a very special greeting with Sawyer and she did beautifully and was even approaching me by the end of the photo shoot.  “Shedding Shyness” was one of a series of four commissioned paintings including, “Happy for No Reason”, “Roamin’ at Rest” and “Li’l Devil with a Dash of Angel”.  What an incredible group of animals.  Yes … there were 2 cats and 2 dogs that got along fabulously and were so much fun to get to know.

Having a pet portrait is a really big deal for you and your pet.  If you are living with a pet that is very special … consider having a pet portrait done.  It is a wonderful way to honor them as well as experience that “happy feeling” when you see them, when they are no longer with you.

Join us this Friday and every final Friday of the month for the BIGGEST PARTY in town.  Pendleton Art Center where 900 + people wander on 8 floors enjoying art!  Make sure you come and visit us on the SECOND floor STUDIO 221, I have a special surprise, especially for all those Michael Jackson fans.

See VIDEO by clicking on the link below.
http://youtu.be/kSXZOaaPlPM 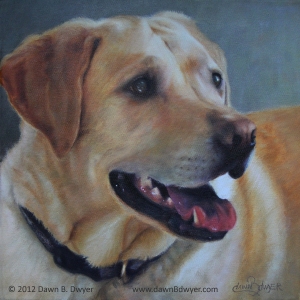 Happy for No Reason 12 x12 oil painting by Dawn B. Dwyer

Today I wanted to share a story about a chance meeting with a guy’s father, who I met in STAPLES, who knew how much his son and daughter-in-law loved their pets.  As a result of him taking my business card and giving it to his son.  A very lucky wife woke up on Christmas Day  to find a fine art 12 x 12 oil painting of her beloved yellow lab under the Christmas tree.  Her husband had commissioned me to do this painting along with 3 others (another dog and 2 cats) so that he could surprise her.  He knew how much she loved theses beautiful animals and wanted to give her something that would last for years to come.  How romantic I kept thinking as we put together the plan.  I just love it when I see a man go way out of his way to put together an elaborate plan to surprise his wife and do something that he knows will really make her happy.  What an incredible way to show how much you love someone.  Pet Portraits fill up your senses in so many ways when you look at them.  A certain look reminds us of a particular moment that we shared with them. “Happy for No Reason” does just that.  If you have spent time with a Lab you know this look.  They are the sweetest dogs and have an incredible happy spirit.  This painting is SOLD but if you would like a Giclee (high quality print version on canvas or paper) I will have them available early 2013 and taking orders now.  Please just contact me.  The sizes will vary from 6″ x 6″ to the largest version 36″ x 36″. 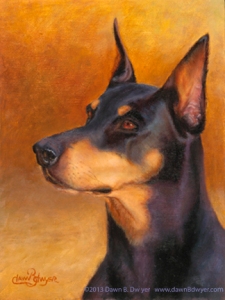 I am frequently commissioned to do a painting of a pet that has made such an impact in a person’s life that there is only one way to really honor this special pet.  It is such a privilege to be a part of the process and to do the portrait.  Asia was one of these special animals.

An oil painting can actually conjure up the feelings that your special pet brings out in you, especially when they are no longer in your life.

I know that Asia has a special story and that her final home was not her first home. I hope to get her story posted as I think that it is important to share. 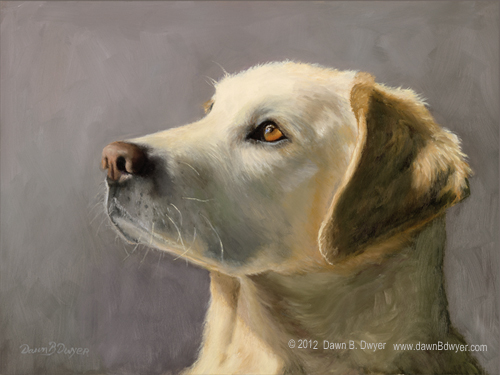 Looking to the Light by Dawn B Dwyer

I was once told by a Gallery owner that every painting has a story and this painting, Looking to the Light is no different.  It started a little over 9 years ago when I was talking with a real estate client of ours.  We were both telling each other how we had gotten puppies.  To our surprise, they were both born on the exact same day.  Laurie’s was a Yellow Lab named Rebel and mine was a Min Pin we named Ally. When we realized this, there was a special bond and when we spoke we would always ask about the others dog.  Sadly eight years later Laurie told us that Rebel was diagnosed with cancer.

When I heard this there was a sudden urge to go to her house and photograph Rebel.  We had lost a puppy at 13 weeks old and I remember how much I cherished the few photos I had.  So I called Laurie and Billy and asked if I could come over and photograph Rebel so that I could do an oil painting of him.  He was a beautiful lab and I felt compelled to do a painting of him.  They thought their Realtor was a bit nutty, but they said, “Sure come on over if you want.”  They didn’t get it and I didn’t either at the time, but this painting would become a very important painting for both of us.

Laurie, Rebel and Dawn at the SPCA Doggie Dash

Because I was doing this painting for myself there was no rush and in May when it was just about complete, I called Laurie and invited her to see the painting at an SPCA event where I was showing my art.  Everything was done except a little work around the muzzle and the whiskers.

After that day, I got busy with other things and never did put the whiskers on until several months later.  On Aug. 31, 2011 I decided to finally put the whiskers on and then enter the oil painting into a contest. After I added the last whisker, I immediately called Laurie to say it was done and to ask her about a title.  When I called she didn’t answer the phone.  The next day there was an email from Laurie in my inbox.  I couldn’t believe what I read.

She said that when the phone rang she was at home but didn’t answer because they had just said goodbye to Rebel one minute before I called and were actually carrying his body out of her home when the phone was ringing.  She said it was odd, as she was saying goodbye to him that she thought about the painting.  When you look at the timeline, I was putting the last strokes of paint on the painting as Rebel was taking his last breaths. I have my doubts that this was all just a chance happening?

When I first showed the painting in my studio at the Pendleton Art Center, it was amazing to watch how people would gather around that one painting and marvel at how real it looked, it was without a doubt the show stopper.  So I knew this was the painting to enter into one of the most difficult art exhibits/contests, ViewPoint 44.  And now, I am proud to announce that “Looking to the Light” has been accepted into the ViewPoint National Juried Show.  Only 70 paintings were chosen out of hundreds that were submitted from around the country.

“After our Shih Tzu, Winnie passed in November, I decided to commission a portrait of her as a gift to my husband.  I was looking for an artist who not only had a high level of representational skill but also made the leap of capturing the heart and soul of the portrait subject.  As an Art History major and as person with a background in advertising, I had a true appreciation of the difference.  This is why I chose Dawn B. Dwyer.

Thank you for the incredibly special portrait of Winnie. You truly captured her essence.

Dawn, I don’t know if you were aware of my two daughter’s response to the portrait when you brought it over and they had the chance to see it.  They were so moved by the painting that they both cried when you left.